In an indication that he is extending his outreach to voters of all sectors, Paul attended a luncheon at the Torah Umesorah Hebrew Day School in Brooklyn Monday at noon.

The lunch was not a fundraiser or a campaign event, rather dubbed as “Jewish community leaders in a conversation with Senator Rand Paul.”

With education being of paramount concern to parents, community leaders are pleased at the opportunity discuss education with Paul at the headquarters of Torah Umesorah recognized as a national voice for over 900 Jewish day schools across the United States, one of the organizers told JP.

The luncheon itself was hosted by Dr. Richard Roberts of Lakewood, New Jersey.

“Having a major presidential candidate at the level of Rand Paul allocate time to meet in conversation with Jewish leaders is indicative of his desire to be inclusive and engaging in meaningful dialogue with leaders of our community underscores the friendship of Senator Paul to the Jewish community,” said Ezra Friedlander, CEO, of The Friedlander Group whose firm coordinated several events on Capitol Hill that featured the Rand Paul’s participation.

In terms of outreach to a group who identify most with the Republican Party, Paul seems to have done the most legwork among Republican candidates running for president, notwithstanding Ted Cruz and Marco Rubio’s efforts to court Jewish donors.

At the meeting Paul expressed support for Israel as one of America’s “best allies and best friends.”

The NY Daily News reported that Paul said “I would ask the question: ‘Are we better off or worse off without Khadafi?’”

He also expressed that he favors continued negotiations with Iran.

“The people who say, ‘Let’s just be done; let’s just bomb the Iranians — I think are simplifying what might happen,” Paul warned. “It could be it steels their resolve, and they have a nuclear weapon within a year.”

During his campaign kickoff speech, Paul presented himself as a hawk on Iran, adopting mainstream Republican opposition to the current framework deal with Iran. Paul stated, “Until we name the enemy we can’t win the war. The enemy is radical Islam, you can’t get around it. And not only will I win… I will do whatever it takes to protect the United States from these haters of mankind.” He further proclaimed, “I will oppose any deal that does not end Iran’s nuclear ambitions and have strong verification measures. And I will insist that the final version will be brought before Congress.” 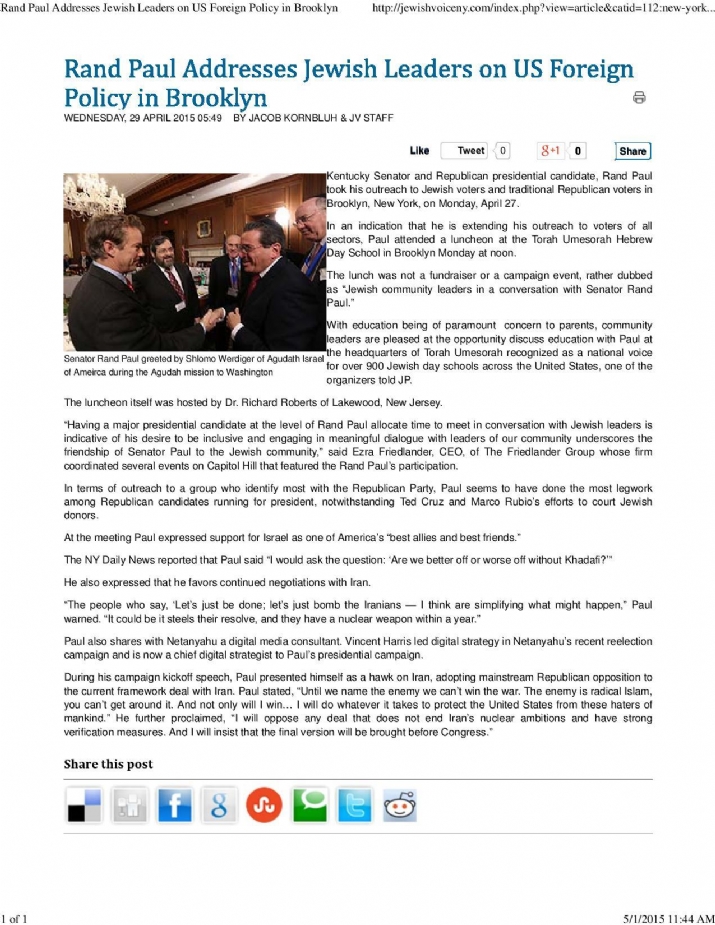