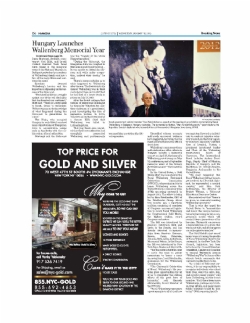 BUDAPEST, Hungary
Government ministers from Hungary, Sweden and Israel launched the Raoul Wallenberg Year yesterday, commemorating the centennial of the birth of the Swedish diplomat who saved the lives of tens of thousands of Hungarian Jews during the Holocaust. While serving as Swedish envoy in the Hungarian capital, Budapest, from July 1944, Wallenberg gave Jews Swedish travel documents and set up safe houses for them. He is also credited with dissuading German officers from massacring the 70,000 inhabitants of the city’s ghetto.