On June 15, 2017 dozens of Jewish leaders from Brazil, Mexico, Russia, Israel, and the U.S., along with Christian leaders and legislators, gathered on Capitol Hill in honor of the 40th anniversary of Efrat, an innovative Israeli organization dedicated to helping Israeli women choose life for their babies. Efrat accomplishes this mission through educating women and the public; easing the emotional pressure through counseling; and providing food, housing, and needed equipment, such as strollers and cribs. While the celebration included speeches from U.S. legislators, the main emphasis was to honor the heart and soul of Efrat: President Dr. Eli Schussheim and Mr. Woli Stern the Director (Brazil). The event was coordinated by The Friedlander Group and emceed by Michael Kierszenbaum.

When the Israeli Parliament legalized abortion in 1977, Dr. Eli Schussheim, who had chosen to be a surgeon in order to save lives, was deeply grieved that 60,000 pregnancies were being terminated each year. He teamed up with Herschel Feigenbaum, the founder of Efrat and a Holocaust survivor, to seek an increase in the Jewish birthrate by decreasing the number of abortions.

To date, Efrat has saved more than 70,000 lives. In Israel, this is the equivalent of saving an entire city.

After an opening prayer for the victims of the recent shooting attack at a Congressional baseball practice, U.S. Representatives Trent Franks (R-AZ), Doug Lamborn (R-CO), Andy Biggs (R-AZ), Louie Gohmert (R-TX), Doug Collins (R-GA), and Senator Rand Paul (R-KY) delivered remarks championing the cause of life and praising Efrat for their successes. "We need more groups like yours," said Rep. Andy Biggs (R-AZ). Senator Rand Paul (R-KY) discussed how fundamental the right to life is, saying "it's hard to figure out how to get to all these other rights [freedom of religion, freedom of speech, etc.] when you don't exist." Many of the legislators echoed what Rep. Trent Franks (R-AZ) articulated: every child "has the image of God stamped on his soul."

Among the Jewish and Christian leaders present, Richard Hellman, Founder of the Christians' Israel Public Action Campaign (CIPAC), described the importance of having a thriving Jewish population and that it's "important for Israel to be a Jewish state - free, democratic, respecting the same Judeo-Christian values that we do here in the United States." Joshua London, the Co-Director of Government Relations for the Zionist Organization of America (ZOA), underscored the significance of a growing Jewish population, saying that Efrat is the "most effective organization at attempting to solve a holy demographic issue."

Dr. Eli Schussheim's eyes danced quietly as he listened to each speaker, and when it was his turn to deliver remarks, he did not hold back. "He roars like a lion" when he speaks of life, concluded Rabbi Abba Cohen, Washington Director and Executive Vice President for Federal Affairs Agudath Israel of America. Dr. Schussheim honored his friend and long-time nonprofit partner, Mr. Woli Stern, who has directly saved more than 6,300 lives. In a powerful moment, Dr. Schussheim presented Mr. Stern with a "Book of Life" listing all the names of the children saved through his efforts, and he tearfully, joyfully noted that many of these children were now having children of their own. Dr. Schussheim grieved the fact that Israel is still losing about 40,000 lives to abortion each year, but he remains hopeful that Efrat will continue to expand their great work as they look to the future.

The event concluded by honoring the generous supporters of Efrat who, along with Dr. Eli Schussheim and Mr. Woli Stern, are the modern day Miriam, saving the lives of Jewish babies whose mothers think they have no other option.

Rabbi Baruch Valt of Sao Paulo, Brazil noted that "an orphan nation is a nation without children." Efrat's mission is central to ensuring that Israel never becomes an orphan nation. Efrat's work is not only crucial to maintaining the Jewish State but also a profound example to the rest of the world for how to create a culture of life. 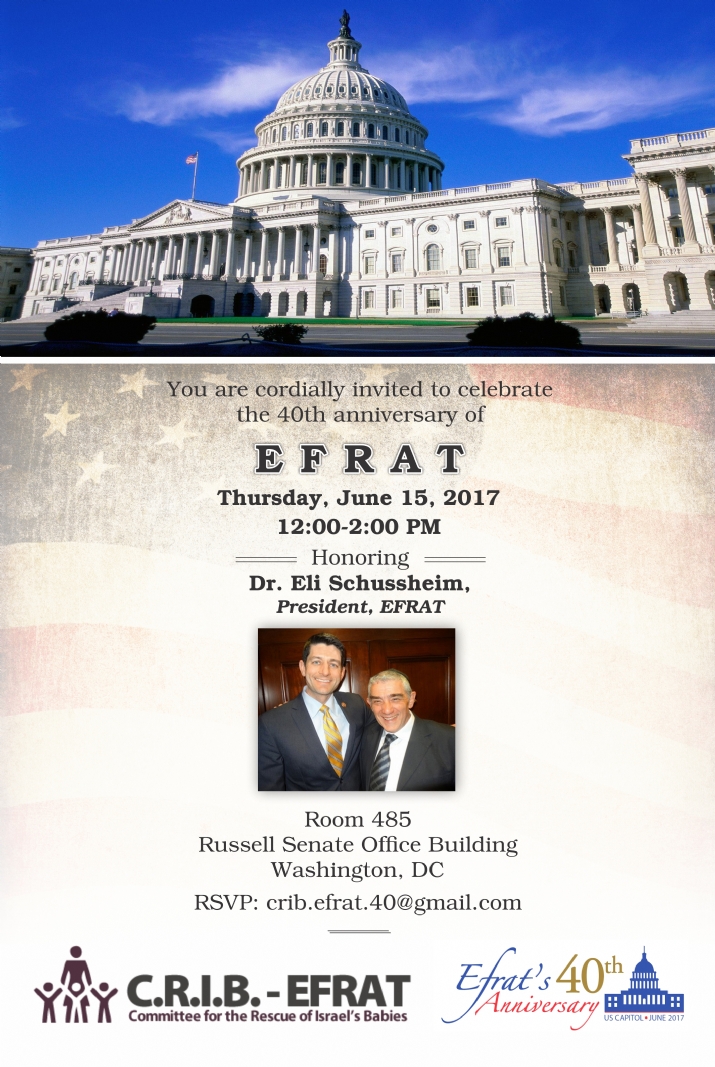